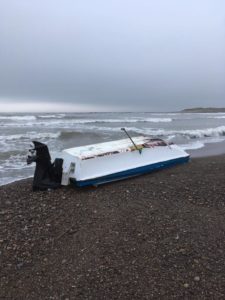 Our volunteers launched both our lifeboats on service following reports of a small fishing vessel with engine difficulties off Sker Point which was taking on water. The boat had 2 persons onboard. Our Atlantic 85 attempted to make radio contact with the vessel but had no reply. A search of the area around Sker Point was undertaken and the Atlantic 85 located the boat which appeared to be grounded on rocks at Sker Point but could not account for the 2 persons who were reported to be onboard. 2 crew members from the A85 swam ashore in heavy swell onto Sker Point and scrambled across rocks to reach the casualty vessel. Once our crew members arrived on scene they were able to confirm the 2 persons were standing on rocks alongside their boat (shaken but otherwise unharmed) but were in a location where they were cut off from the land. The crew supported the casualties until the Coastguard rescue helicopter from St. Athan arrived on scene at which point their boat rolled onto its side numerous times. The Coastguard rescue helicopter winched both casualties from the rocks and transferred them onto land at Sker Point where Porthcawl Coastguard Team members met them. One casualty was transferred to Morriston Hospital by the helicopter for a checkup whilst the other was taken back to Port Talbot (from where they had launched) by the Coastguard Team from Port Talbot.