The D Class (IB1) Lifeboat has been the workhorse of the RNLI fleet for over 50 years. Able to operate closer to shore than our Atlantic 85 the IB1 is ideal for rescues close to shore in fair to moderate conditions. The IB1 can be manually righted by the crew after a capsize. Fitted with the RNLI’s SIMS system which was developed in-house she is equipped with chart plotter, VHF and AIS which allows her location to be tracked in real time. Launched at Porthcawl using a Tooltrak tractor and trailer unit. 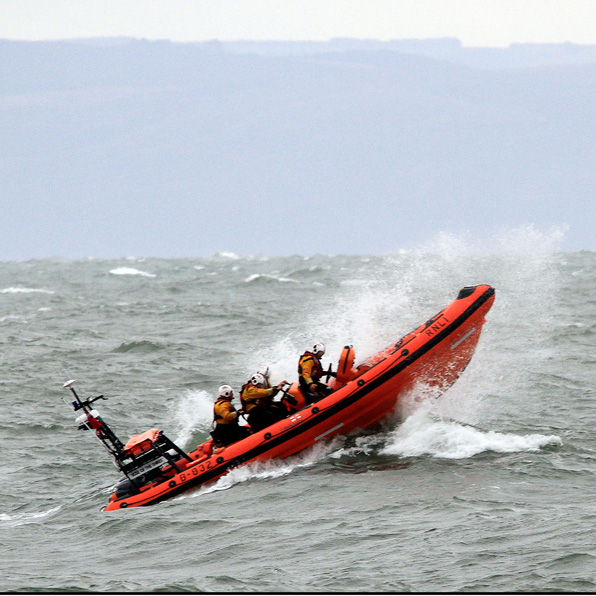 Rose Of The Shires is one of the new generation of RNLI B-class Atlantic inshore lifeboats, first developed from a design originated at Atlantic College, near Porthcawl, in South Wales. The ’85’ refers to the boat being almost 8.5m in length.

With a crew of four, and two inversion-proof 115hp petrol engines, the lifeboat is capable of speeds in excess of 35 knots, and is fitted with a manually operated righting system which, combined with her inversion proofed engines, allows her to remain operational even after capsize.

At Porthcawl the boat is launched using a specially designed Tractor unit with carriage. Equipped with the RNLI’s SIMS system which was developed in-house she is fitted with radar, chart plotter, VHF radio direction finding equipment and AIS which allows her location to be tracked in real time. She has an endurance of 2.5 hours at maximum speed.

Developed jointly with the RNLI, the Talus MB-4H is the first tractor to be specifically designed for the task of launching inflatable lifeboats. Previous lifeboat tractors had been converted from commercial designs.

It was necessary to design a special tractor because commercial designs were becoming more difficult and costly to adapt and could not meet the RNLI requirements, such as ground clearance, steering ability and full waterproofing.

Development took place at Knighton, at the Company Test facility. The prototype was then tested at lifeboat stations with the most arduous launching conditions. Trials were completed and the first tractor went on station at New Brighton in November 1990. 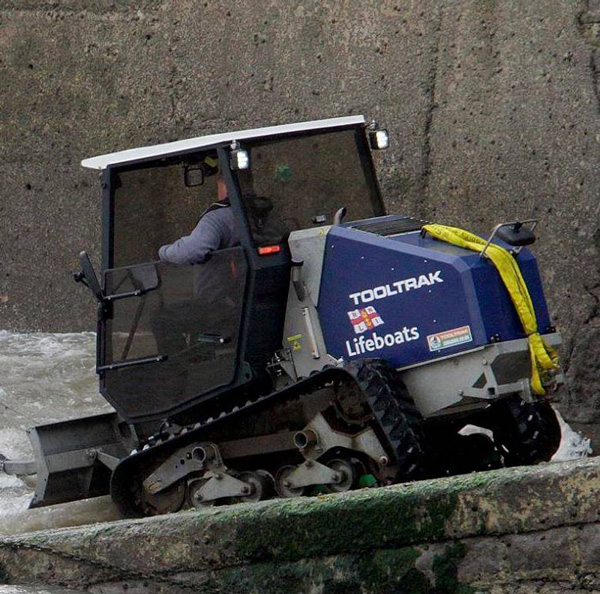 The RNLI Tooltrak is a compact rubber tracked crawler based tool carrier for use in marine environments for the launch and recovery of lifeboats and other craft. It is designed for operating on extremely soft ground conditions such as estuary mud or sand, or on shingle beaches.

The machine is capable of wading to a depth of 0.65m and is able to withstand momentary swamping by wave action (0.65m) from the front or rear without the engine stalling or the windscreens being damaged.

In the event of water ingress the Tooltrak is fitted with an automatic bilge pump mounted within the vehicle sump.