As the festive season approaches, the RNLI in Wales is issuing its own call for help, as new figures show Christmas call outs over the last 40 years have rocketed. At Porthcawl lifeboat crew launches during the last two years have been greater in number than any period since the lifeboat station was opened in 1965. The charity is facing a Perfect Storm, with more people drowning and a shortfall in funds, meaning support from the public is more vital than ever. We need more money to save more lives.

In 2018 we were the busiest RNLI lifeboat station in Wales and with a similar number of launches this year we could be heading for a similar situation when figures get released for 2019. Over the years the cause for callouts has shifted for the volunteers heading to sea. In the early 80’s, nationally statistics show the most common cause of callout was to vessels with machinery failure. Figures have revealed that since 2000 many of those needing help are often just visiting the coast and not out on vessels or watercraft.

To ensure the RNLI can continue its lifesaving work this Christmas and into the future, the charity is running a major fundraising appeal, The Perfect Storm, with the aim of raising £1.8M and recruiting 12,000 new supporters.

While many families will be thinking about presents, turkey and time with the family, dedicated RNLI volunteers from 238 lifeboat stations across the UK and Ireland will be ensuring their traditional yellow wellies and lifejackets are ready for when the call comes. At Porthcawl all crew will be on standby twenty four seven, like every other day throughout the year. 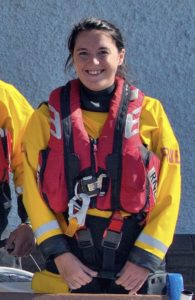 Several of our volunteers will be working at their full time professions over the festive holidays as well as being available for ‘shouts’ when not in work. At least four of our volunteer crew will be working over the Christmas holidays. This includes two police constables, a paramedic and one of our newest crew, Angharad Masson who is a staff nurse at Princess of Wales Hospital at Bridgend.

Angharad who joined the crew earlier this year will be in work Christmas afternoon and Boxing day. She said, ‘I will also manage to volunteer for safety on Sandy Bay to help at the Christmas Morning Swim alongside other members of our crew before I go in for my afternoon shift. This will be a change for me as I have been a swimmer participant in the event for many years’. Having studied at university and settled into her duties as a staff nurse she was looking for something of interest to do outside of work. With her father being honorary Chaplain at Porthcawl lifeboat the RNLI stood ready to fulfil her ambitions. Although a new crew member she has been surprised at the number of launches that take place at all times of day and night and often in poor sea conditions. Angharad has already played a vital role as crew on several shouts especially one where the casualty, who was not breathing, recovered following resuscitation.