Porthcawl RNLI volunteers had a busy few hours on Saturday 24 April launching to five incidents within a few hours. Many of the incidents were caused by very strong easterly winds which were offshore at locations across the coastline of the County Borough of Bridgend and the Vale of Glamorgan.

The first call came for the RNLI crew at 2.54pm when both the charity’s Atlantic 85 lifeboat Rose of the Shires and D Class lifeboat Super G II were launched following a report there were people in the water along with a Stand Up Paddleboard being swept out to sea off Ogmore By Sea.

As the crew arrived on scene they located the casualties who had all managed to make their way back to safety onto the beach. The crews of both lifeboats made their way back to Porthcawl and as they passed Newton Bay they were flagged down by a windsurfer who had suffered equipment failure with a broken boom. The casualty was taken onboard the Atlantic 85 lifeboat along with his equipment and dropped back into the beach at Newton. Following this, both lifeboats were recovered, refuelled and made ready for service. As the lifeboats were about to be rehoused a further call came for two surfers struggling against offshore winds at Rest Bay.

The Atlantic 85 lifeboat was relaunched within minutes and made its way to Rest Bay. The crew located the two surfers who were slowly making some progress back to the shore. The crew stood by and monitored the surfers until they got back to the beach and were then stood down from the incident and returned to the lifeboat station.

‘The strong Easterly offshore winds were certainly catching a lot of people out along the coastline on Saturday. As we washed the lifeboat down for a second time we got a further tasking from UK Coastguard. This time we were launched to a 13-year-old boy on a bodyboard being swept out by the offshore winds at Rest Bay.’

The Atlantic 85 lifeboat was launched for the third time of the day and made best speed to Rest Bay. The boy was quickly located clinging to his bodyboard and brought onboard the lifeboat. Although a little shaken the casualty required no further medical attention and was dropped ashore at the slipway at Rest Bay. Crew went ashore to reunite the boy with his parent/guardian and meet with the Porthcawl Coastguard Team.

The Atlantic 85 lifeboat then returned to station. As soon as the lifeboat was rehoused and the crew prepared to head home from the lifeboat station the pagers sounded again and the crew were tasked by UK Coastguard at 5.28pm to a further incident. 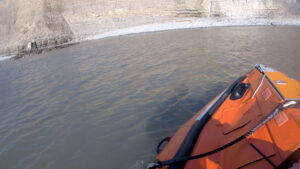 This time a report had been received from Porthcawl NCI that there were people cut off by the tide in Dunraven Bay, Southerndown. The D Class lifeboat Super G II was launched on service and the crew made their way to the location. When they arrived on scene a crew member went ashore to speak to the two casualties who were unaware of their predicament.

They were keen to accept the offer of assistance as the alternative was to wait for around two hours for the tide to recede. The two casualties were taken onboard the lifeboat and transferred to the slipway in Dunraven Bay. As the casualties disembarked the lifeboat another report was received from Porthcawl NCI who had spotted a further group of people cut off by the tide. The RNLI crew made contact with this group who were happy to wait for the tide to recede and had adequate equipment and clothing with them.

‘We’re anticipating a very busy summer ahead as Covid-19 restrictions continue to ease. If you’re heading to the coast be aware of the conditions and your capabilities and only enter the water if it is safe to do so. Check your equipment is in good working order. If possible visit a lifeguarded beach.

‘If going afloat, carry a means for calling for help and always wear a lifejacket. Check tide times daily, particularly for areas where you may get cut off by the tide.

‘If you see someone in difficulty, or you get into difficulty yourself, please call 999 or 112 and ask for the Coastguard.’

The health crisis has hit our income hard. Lockdown halted the fundraising events we rely on to power our lifesaving service. Support our volunteer crew by donating to: Porthcawl RNLI Lifesavers’ Fund 2021.