A fisherman was rescued from the water on Monday 22nd November by Porthcawl RNLI’s volunteer crew after using his mobile phone to call the emergency services for help.
UK Coastguard tasked both Porthcawl’s Atlantic 85 lifeboat, Rose of the Shires and relief D Class lifeboat, Super G II along with The Mumbles Lifeboat Roy Barker IV and the Coastguard helicopter based at St. Athan’s to respond to the fishermans distress call. Porthcawl Coastguard and Port Talbot Coastguard were also tasked. UK Coastguard also broadcast a MAYDAY call.
The man had been working on deck when a rogue rope had taken him over the side just as he was getting into his life jacket and waterproofs. Fortunately he managed to get hold of one of his own marker buoys and call 999 for help using his waterproof mobile phone.
The man was spotted by the Coastguard helicopter around 5.5 nautical miles west of Porthcawl in the water close to Scarweather Sands. He was quickly pulled from the water by the volunteer crew of Porthcawl’s Atlantic 85 lifeboat.
A Coastguard paramedic was lowered from the helicopter onto the Atlantic 85 and the man was then quickly transferred to the warmth of the Mumbles all weather lifeboat which made immediately for the lifeboat station in Mumbles.
This was the first shout for the newly qualified volunteer coxswain of The Mumbles Lifeboat, Josh Stewart who said ‘The fisherman was very well prepared for safety at sea. He carried a Personal locator beacon in his life jacket but unfortunately was pulled over the side while dressing. Again his quick thinking of carrying a waterproof mobile phone definitely saved him. His boat was still under power and came ashore on the beach at Rest Bay, Porthcawl. He’d been in the water for nearly an hour when he was picked up. His body temperature was very low when he came onboard Mumbles Lifeboat and he was shaking considerably. He’s a very lucky guy.’
Porthcawl’s D Class crew recovered the fisherman’s vessel from the shoreline at Rest Bay and later put it safely alongside the pontoons in Porthcawl Marina.
Philip Missen MBE, the lifeboat operations manager at Porthcawl RNLI said, ‘a man’s life was definitely saved today through the great teamwork and multi agency response of all those involved.’ 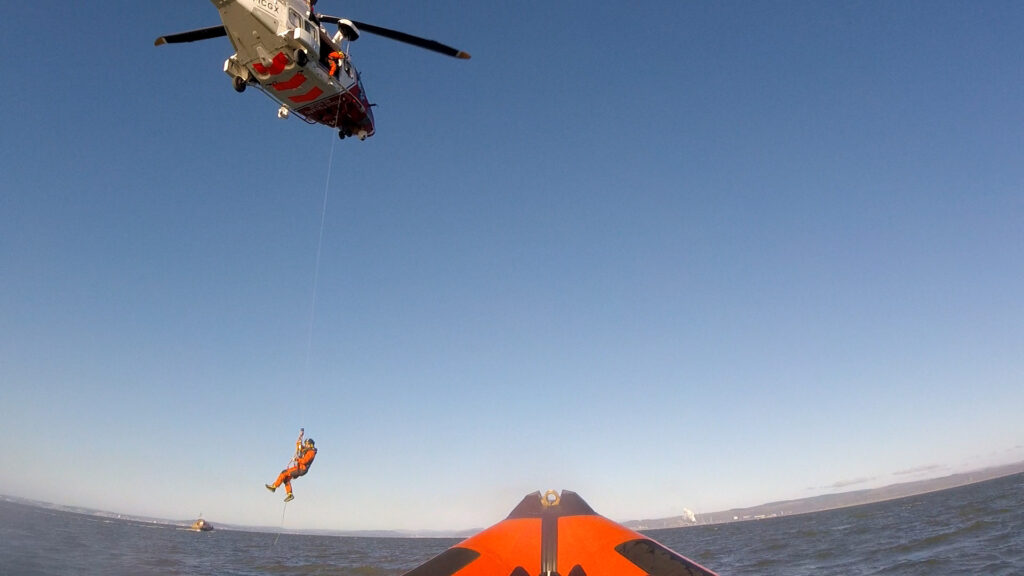 Coastguard Paramedic being lowered to the Atlantic 85 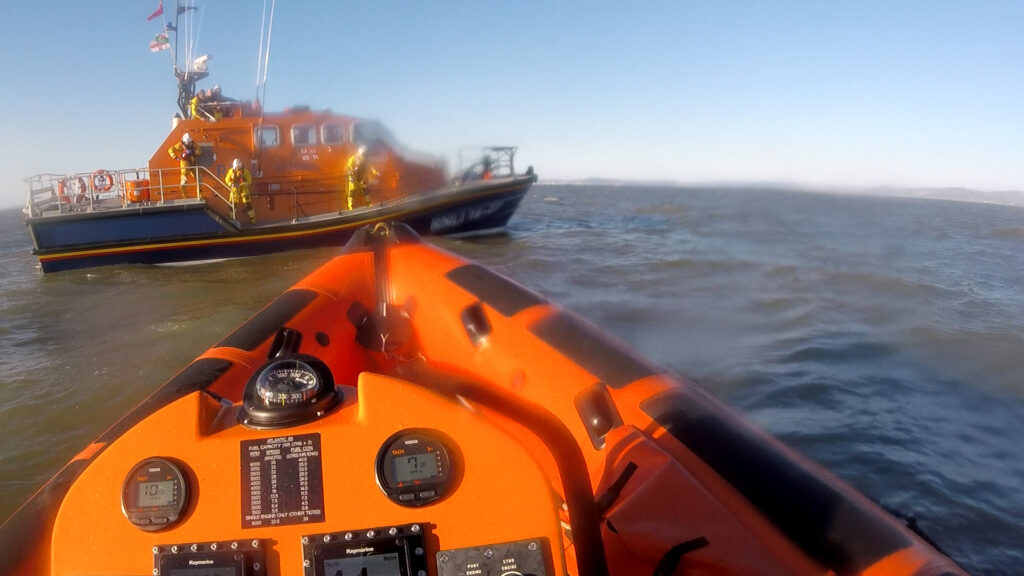