Saturday 23 April marks the 75th anniversary of the tragedy in which 47 lives were lost from both the liberty ship SS Samtampa and the RNLI’s Mumbles lifeboat Edward, Prince of Wales at Sker Point.

Porthcawl lifeboat launch authority Ross Martin said, ‘there was a raging storm on that fateful night. The Samtampa had sailed from its home port of Middlesbrough a few days earlier and entered the Bristol Channel seeking shelter along the north Devon coast. Engine power nor anchors could hold the vessel which was blown across the channel towards the South Wales coast. The crew made a distress call and The Mumbles lifeboat was launched into the teeth of the storm to attempt a rescue. 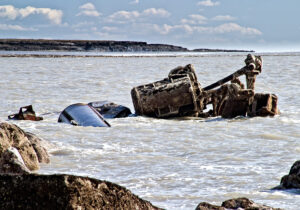 The Samtampa was washed onto rocks at Sker Point and broke into three. Attempts to rescue the crew from the shore by Porthcawl Coastguards failed due to the gale force winds. The following morning The Mumbles lifeboat was found upturned on Sker rocks, the crew having perished during the night in their efforts to save the casualties.’

On 23 April flowers will be laid at Porthcawl cemetery in morning. Members of Porthcawl RNLI, Porthcawl Coastguard, Porthcawl Museum and other organisations will meet at the memorial plaque on Sker Point at 5pm which marks the time the Samtampa first grounded at Sker Point.