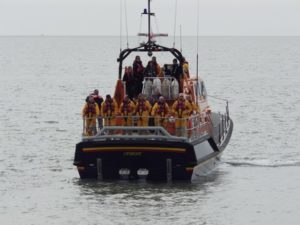 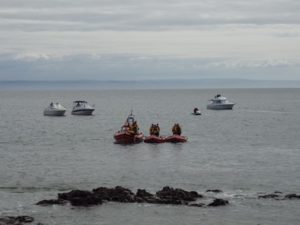 A service was held at All Saints Church, Porthcawl and at the memorial plaque in the rocks at Sker Point over the weekend in memory of those lost at Sker seventy years ago. Porthcawl’s combined rescue services made up of Porthcawl Unit of UK Coastguard Agency, Porthcawl RNLI and Porthcawl Fire Service, together with members of Porthcawl Museum and the public remembered the tragedy of the liberty ship ‘SS Samtampa’ and the RNLI’s The Mumbles lifeboat ‘Edward, Prince of Wales’. Crews of both vessels, forty seven in total, perished in a raging storm that swept up the Bristol Channel on 23rd April 1947.
Spokesperson for Porthcawl RNLI, Ian Stroud said, ‘Both services were well attended showing even though it was seventy years ago our town will not forget the tragedy that befell the crew of the Samtampa and the dedication of The Mumbles lifeboat crew who in a brave effort to come to the rescue of the stricken vessel, all lost their lives too. As the tragedy was taking place Porthcawl Coastguards lost their battle to effect a rescue of the crew of the Samtampa when all attempts to fire lines onto the stricken vessel failed because of the severe gale that day. By contrast it is almost impossible for
us to imagine the conditions during that storm seventy years ago especially standing at Sker on Sunday when the sun shone, there was hardly any wind and the sea was flat calm.
During the service at Sker Point, those on shore watched as The Mumbles current lifeboat led other lifeboats from Porthcawl and Port Talbot together with a privately own Watson class lifeboat and a flotilla of small boats to the area. As they stood off the rocky shore wreaths were laid on the water by each lifeboat crew in memory of fellow sailors and lifeboat men who lost their lives seventy years ago’.
The service was followed by a short dedication to a memorial that has been laid at the Prince of Wales, Kenfig by landlord Gareth Maund, in memory of the Samtampa tragedy.
By Chris Page| 2017-04-24T12:16:08+00:00 April 24th, 2017|Categories: Uncategorised|Comments Off on Seventy Years on we Remember the Maritime Tragedy at Sker Point