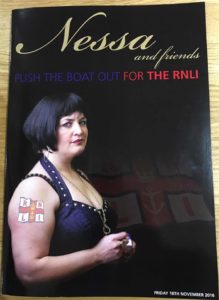 Ruth Jones aka ‘Nessa’ from Gavin and Stacey fame, entertained a packed Porthcawl Grand Pavilion theatre last Friday all to raise money for Porthcawl RNLI. The evening is thought to have raised in the region of £18,000 for the charity.

James Corden opened the evening with a video message from ‘Smithy’ which was filmed on the set of James’s American chat show. The Late Late Show host went on to introduce the star of the evening, ‘Nessa’ better known locally as Ruth Jones, who grew up in Porthcawl. She took on the role of compere for the evening in the style of her highly successful Gavin and Stacey character. She was supported by her friends Bonnie Tyler, Only Men Aloud, singer actor Craig Gallivan and during the meal singer Russell Jones Jnr. But to the surprise of the audience one more guest appeared just in time to join Nessa on stage to sing their number one Comic Relief hit ‘Islands in the Stream’; yes, none other than ‘Uncle Bryn’, Rob Brydon. Their duet was a huge success and received a standing ovation from the audience. Following on for the rest of the evening The Dave Barry Big Band kept everyone entertained with many of the audience enjoying a dance to a wide variety of tunes.

The evening was initiated by Ruth earlier in the year in support of the Porthcawl RNLI volunteers, one of whom is her brother-in-law crewman Etienne Cronje. Once a date had been set she then made all the arrangements for the evening which included a three course meal and entertainment. To help raise funds on the night Ruth went around the tables having ‘selfies’ taken with members of the audience. Raffle tickets were also sold and a raffle drawn. That was followed by an auction which included a wide variety of items professionally sold by auctioneer Andrew Thomas, from HRT estate agents in Cowbridge.

Porthcawl Lifeboat Chairman, John Abraham said, ‘The whole evening was a true success for Ruth and her friends, the audience and of course Porthcawl Lifeboat Station. We are grateful for all the effort that she put into making her evening so special for us, she definitely Pushed the Boat Out for Porthcawl RNLI’.