Sunday 15 June was a day of mixed emotions for Porthcawl RNLI volunteer helm, Carl Evans as he retired from his role as sea going crew at Porthcawl.

Carl joined the crew during the summer of 1989 at the age of 23, two days after meeting his future wife Angela.

Carl said, ‘I’m most grateful to Angela and all my family for supporting me over the 32 years during which I’ve been sea going crew at Porthcawl. I used to cycle down to the station as a child to see what was going on whenever I heard the sound of the maroons, so it was only natural I went on to join the crew. 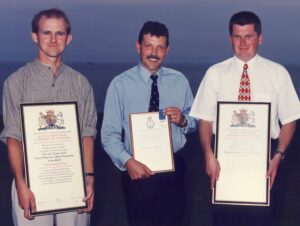 ‘I’ve been been involved in many memorable shouts over the years including being crew of a callout in which helm, Stuart Roberts was awarded the RNLI’s silver medal for gallantry. We launched onboard the station’s D Class to rescue a surfer in conditions at the operating limits of a D Class lifeboat. The honorary secretary, John Williams made the difficult decision to allow the launch because the situation was so grave. The RNLI inspector described the service as being superbly executed in severe surf, wind and tidal conditions which demanded the most excellent confidence.

‘Other memorable shouts include rescuing a fisherman who had been swept off Witches Point with Ross Purchase and Lewis. Another being locating a yacht lost in the dark at Nash Point. The yacht crew were very scared and disorientated and so grateful we found them and as we came alongside the yacht a 14 year old boy jumped straight onto the lifeboat. A launch that sticks in my mind is rescuing a swimmer who appeared to give up going face down in the water just as we arrived 10 feet from him. Pulling him out of the water and saving his life makes you proud to have the opportunity to volunteer as an RNLI crew member.

‘As well as the notable rescues my best moments are seeing the new younger crew coming through and developing their skills. There’s nothing more rewarding than helping them develop. I’m also very proud that my sons Dan and Lewis both joined the crew and whilst work commitments as a medical doctor meant Dan had to move away, Lewis is still a volunteer at Porthcawl. We have a great team at Porthcawl and I’m proud to be a part of it.’ 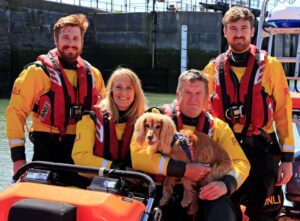 On Sunday Carl was joined by members of his family for photo’s in the marina onboard the charity’s relief Atlantic 85 lifeboat, Irene Cornford. Carl was joined by wife Angela, son Dan (a previous member of Porthcawl’s crew), son Lewis (a current member of Porthcawl’s crew) along with Penny, Carl’s dog for photographs on the lifeboat. A small presentation was made outside the lifeboat station to thank Carl for his service as sea going crew along with singing ‘Happy Birthday!’

Lifeboat Operations Manager, Phillip Missen MBE said:
‘Whilst it is sad to see Carl retiring as sea going crew we are most grateful to him for his service over the years. We’re also pleased that Carl will be continuing to volunteer at Porthcawl in the role of shore crew and as a tractor driver.’
By Chris Page| 2021-06-15T14:55:58+00:00 June 15th, 2021|Categories: News|Comments Off on End of an era as Porthcawl RNLI volunteer helm retires as sea going crew