Porthcawl RNLI volunteers had a very busy few hours yesterday (Sunday 13 June 2021). The first launch request from UK Coastguard came at 5.47pm when both of the charity’s lifeboats were requested to launch at the same time to two separate incidents.
The relief D Class lifeboat, Super G II was requested to assist with a missing child search at Trecco Bay with the child later being found safely ashore. The relief Atlantic 85 lifeboat, Irene Cornford was tasked to assist a father and son on a kayak and SUP between Ogmore and Southerndown following a 999 call from the concerned wife/mother of the pair.
One of the Atlantic 85 crew went ashore at Hardy’s Bay in Ogmore By Sea to speak with the first informant to establish exactly where the pair were, however another person came forward to the crew member asking for help to find their missing child who was last seen in the water 30 minutes previous.
The Atlantic 85 lifeboat went to check on the welfare of the father and son on the kayak and SUP who initially refused assistance from the crew. The lifeboat then began a shoreline search for the missing child being joined by the D Class crew who had been stood down from their earlier tasking. After around 10 minutes of searching it was confirmed the child had been found safe and well. The team from Llantwit Major Coastguard were stood down as they proceeded to the scene to join the search. The Atlantic 85 crew returned to check again on the welfare of the father and son on the kayak and SUP.
By now it had become obvious to the pair that they were making little progress against the flow of the incoming tide and they asked for assistance to get back to Hardy’s Bay from where they’d launched. They were taken onboard the lifeboat and dropped back to Hardy’s Bay.
The lifeboats both returned to the lifeboat station where they were washed down, refueled and made ready for service. 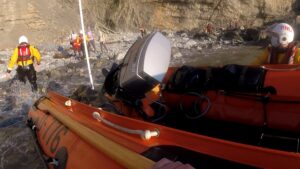 As soon as both lifeboats were packed away the crew were paged again at 7.42pm by UK Coastguard. They had received a report from Porthcawl NCI that a large group of people were cut off by the tide at Dunraven Bay, Southerndown. The tide was still incoming with an hour and a half until high water.
Both the D Class and Atlantic 85 lifeboats were launched and proceeded to the scene. The Atlantic 85 arrived on scene and using a megaphone to converse with the people it was established that ten people in two separate groups were cut off and required assistance.
The D Class crew recovered the casualties off the pebbly beach up to three at a time and transferred them to the larger Atlantic 85 lifeboat. Given the numbers involved it took around 20 minutes to extract all the casualties.
The swell on the slipway at Southerndown meant it would be difficult to drop them ashore safely so all casualties were transferred to Ogmore By Sea and dropped ashore in the shelter of the rivermouth and met by our colleagues from Llantwit Major Coastguard.
Just as the volunteer crews were preparing to leave the scene they were alerted to five further people cut off by the tide on the Newton side of the Ogmore river. The D Class crew transferred these people across to the Ogmore side.
Following a busy few hours both lifeboats returned to station being washed down, refueled and made ready for service by 9.30pm with our volunteer crew finally being able to return to their homes.
If you are visiting the beach this summer visit a lifeguarded beach during patrol hours (10am-6pm). Check tide times before you go and swim between the red and yellow flags. In an emergency on the coast dial 999 and ask for the Coastguard,
Images: Porthcawl RNLI (rescue of ten people cut off by the tide at Dunraven Bay)
To support our volunteer crew with a donation visit: Porthcawl RNLI Lifesavers’ Fund 2021.
By Chris Page| 2021-06-14T13:53:36+00:00 June 14th, 2021|Categories: News|Comments Off on Busy few hours for Porthcawl RNLI Volunteers on Sunday 13 June